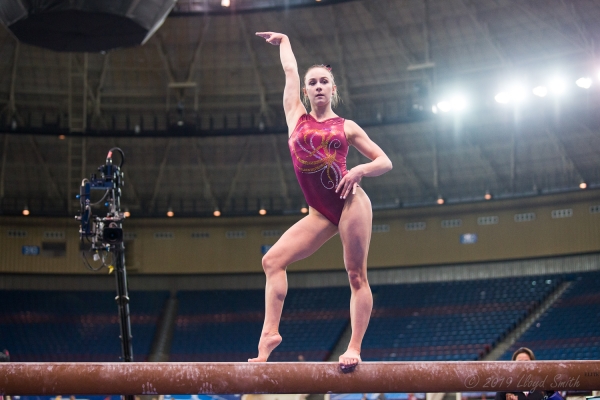 The COVID-19 pandemic cut last season short and has raised new challenges for 2021.  With the season about to get started, we've prepared a new set of Season Previews.  We're covering the entire Top 25 teams, as ranked by the Coaches' Preseason Poll.  In each Preview, we've summarized the team's returning routines, their lost routines, their returning starters and the rest of their roster, with a special focus on their newcomers.  We'll also give a brief overview preview of their prospects and challenges.

Let's not lose sight of the fact that 12 teams have no meets scheduled in the RoadToNationals.com system for 2021.  Many teams and entire conferences have had their 2021 seasons cancelled.  In addition, two other programs are facing cancellation:  Alaska, and SPU (from 2020).  The fight goes on for these two, in particular for Alaska, which has a clear fundraising goal for survival.  We encourage you to support them in any way you can.

Because COVID-19 protocols are in place, there is a high risk of meet cancellations.  Other sports that have been competing, have found their games and matches cancelled due to infection and/or illness.  As a result, the qualifying procedure for post-season competition has been changed.  Normally, a team will qualify through the National Qualifying Score, or NQS (formerly known as the Regional Qualifying Score).  The NQS is computed by taking a team's top THREE away meet scores, then assembling the next THREE highest scores.  The high is dropped and the remaining FIVE are averaged.  This year, the teams will take the top TWO away scores and then the next TWO highest scores.  No score will be dropped and the FOUR scores will be averaged.

In addition, the way judges are assigned to the meets will be changed for 2021.  Due to tight budgets, there will be more "local" meet assignments and fewer "out of area" assignments for judges.  The mixing of judges from various regions will be reduced, a factor that usually helps level out differences in scoring rigor as "less strict" judges travel to new locations.  Judges will also be allowed to judge a Division I school three times at home, and twice away.  Despite many claims, it is not a factor strictly associated with one conference, one region or the size of the school.  There is strict and less rigorous scoring happening across the country, at all levels.  In the past, judges were broadly distributed across the country and judges were more limited in the times they could judge a team.  This aided in the "leveling" effect on judging variation and improved consistency in evaluation.  Having six scores and throwing out the high also helped reduce the impact of scoring variation.  This year, with four scores, limited panel mixing and higher judging limits, these mechanisms are all lost.  As a result, some teams will benefit disproportionately.

Teams are also altering their training.  Some teams have had training impacted by local health restrictions, and some are behind where they normally are at this point in the season.  Some teams will also be having a later start, due to the limited training time and quarantine protocols enacted following holiday travel.  Some coaches are also preparing more gymnasts per event, with more AAers ready to step into the lineups in case of an illness or quarantine action.  Depth is going to be critical this season.  On the plus side, the shorter season and the extended down time has allowed time for injuries to heal.  Without making an official study, it appears there are fewer off-season injuries from training over the extended summer.

Crowds are also expected to be reduced or completely eliminated.  This may reduce the pressure of competing somewhat, or cause a sudden shock to less experienced competitors if things are relaxed later in the season.

The Code:  Impacts from 2020 Continue

Last season, we saw the debut of a new set of NCAA Code Modifications.  Although the season was truncated, it did appear we saw the impact of the changes, especially in teams below the Top 20.  The base start value was reduced, to 9.4 but new bonus rules were added that helped most gymnasts to readily (or even automatically) win back this lost tenth.  While these changes were relatively inconsequential for the top teams, we saw a few more challenges at lower ranking teams, particularly on FX.  This season, the changes are very slight.  These changes were covered in a prior article.

One potential change in evaluation may impact athletes on the BB.  Pauses no longer have to be before difficult elements or connections to be subject to a deduction.  Any pause over 2 seconds can be subject to the deduction.

We may also see some teams take advantage of the extra tenth available for Acro/Dance Acro combinations.  A bonus tenth can be obtained for an A salto (or higher) following a A dance element (or higher) that follows a direct acro connection that includes at least a C value part.  For example, the back layout 1 1/2 twist to barani to split jump can now be followed by a punch front to earn another tenth of bonus.

OU finished last year in first position, but Florida has been voted by the Coaches as the Preseason #1.  Both squads were tied with the same number of first place votes, 16.  Denver also earned a first place vote.  With all the variables in play, it is still tough to call a clear Preseason favorite.

Individually, though, Florida's Trinity Thomas is a clear early favorite in the AA.  She finished 2020 just 0.025 points behind Maggie Nichols in the final NQS rankings.  However, not too far behind are OU's Anastasia Webb and LSU's Kiya Johnson.  Or perhaps some other gymnast will emerge, perhaps a sophomore like Ragan Smith of OU or a veteran like Lexy Ramler of Minnesota.  Individually, Webb is the top returning vaulter, while Thomas and Boise State's Emily Muhlenhaupt are the top returners on UB.  Ramler was the top BB last season and Thomas was tops on FX.

Here are the top five returners by event (based on final NQS from 2020):

That's enough about the changes, let's check out what's happening with the teams!  Here's our Preseason Top 25 Season Previews: