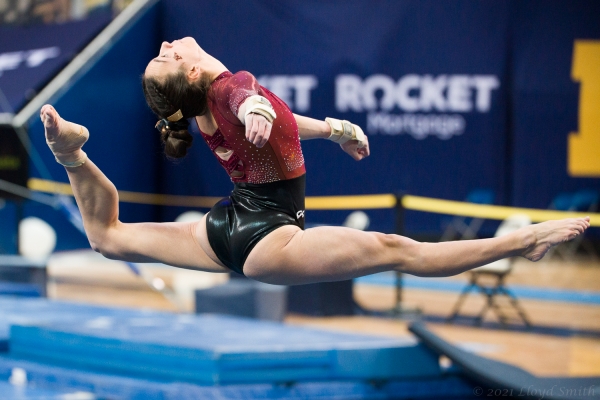 Minnesota's Ona Loper is One of the Top Returning Vaulters (c) 2021 Lloyd Smith, Used by Permission

The 2022 Season is upon us, with a little sense of déja vu.  We have seniors returning for their fifth or sixth years, a load of exciting frosh and some of the largest rosters in our 22 seasons of publishing these reviews.  We're once again publishing Season Previews for the entire Top 25 teams, as ranked by the Coaches' Preseason Poll.  In each Preview, we've summarized the team's returning routines, their lost routines, their returning starters and the rest of their roster, with a special focus on their newcomers.  We'll also give a brief overview preview of their prospects and challenges.

Let's all not forget that the impact of the first year of the pandemic was a bit uneven across the country.  Some teams, and even an entire conference (Ivy League) saw their seasons cancelled.  Teams and gymnasts based in certain states saw their gyms and clubs closed for an extended period of time throughout 2020.  A number of gymnasts took COVID-19 waivers for 2021, and a number didn't return.  However, this season, the teams are all planning for the 2022 season (at this point) and have been able to train the entire fall.  Their recruits have had their gyms open, and have had an entire off season to train.

All gymnasts on the roster last season were granted another year of eligibility.  Seniors were given another year of eligibility and teams were allowed to break their usual scholarship limits and extend scholarships to those seniors.  The teams also recruited normally, and brought in their usual classes of recruits.  As a result, we're seeing some of the largest rosters in years.  Teams with over 18 gymnasts are now common, and one team in the Top 25 has 29 gymnasts on the roster.

These large rosters will provide tremendous depth, talent, experience and ability to manage through injury.  If anything, those teams with a large number of seniors returning for a bonus year have a distinct advantage heading into this season.

The delay of the Olympics by one year delayed the usual Olympic year impact.  Each Olympic cycle, we typically see a number of deferrals, or gymnasts that elect to take a training year or two before entering school.  As a result, the top end of this class is loaded with US and international gymnasts that delayed their competitive debuts until 2022.

The NCAA also made changes to rules regarding "Name, Image and Likeness", or NIL.  As a result, athletes are able to take advantage of opportunities to profit off their fame and achievements, under certain rules.  This option was never available to past generations of NCAA and elite Olympic athletes.  This means athletes no longer have to choose from a financial window of opportunity and the start of a NCAA career.  If anything, a NCAA career may serve to enhance an athlete's popularity, through continued televised appearances, media coverage and athletic success.

Last year, a number of teams had to forfeit meets, including the Regional meet due to COVID-19 protocols.  The recent rash of cancellations in pro and collegiate sports is a reminder that we're not all the way through the pandemic.  A single test result cause a team to have to forfeit or otherwise field less than optimal lineups.  Already, we've had our first announcement of a schedule change, with UCLA pulling out of their first meet.

Crowds are also expected to return this winter, although perhaps not uniformly across the country.  We're still awaiting announcements as a number of schools have already announced the return of online learning and the elimination of spectators.

Code Update:  Little to No Impact

Two seasons ago some significant changes were made to the NCAA Modifications, the rules that govern scoring in NCAA gymnastics.  This season, there are few changes of substance in either the NCAA Code or the underlying USA Gymnastics Development Program Code of Points.  The USAG code is used in all skill evaluations and deductions, unless modified by the NCAA Modifications.

The sole requirements change of note is on the floor exercise.  It concerns the popular two tumbling pass routines that are getting adopted in the NCAA.  These two pass routines must now contain a D element in one pass and a minimum D or 0.2 C bonus connection in the second pass, in any order.  Two pass routines that do not comply will suffer the 0.1 "up to the level" deduction.  However, a relative easy routine with a Rudi and a back layout 1 1/2 twist to punch front layout will satisfy the new two-pass requirement.

It's a wide open field this year.  Michigan, the defending champion, is the preseason favorite.  But talented frosh classes and minimal losses at Florida and Utah have their fans dreaming of National Titles.  Not to be overlooked are the Sooners.  OU has been a perennial contender and has consistently found a way to be in the final mix since 2012.  In addition, LSU, Bama and others are another year stronger and much deeper than last season with talented newcomers of their own.

The large rosters and increased depth means that teams need to be able to be able to field 6 strong routines with little drop off from the lead off to the anchor.  Consistency will be critical of course, and a counting fall will be a disaster that even a top team may not be able to withstand in a much deeper and closely packed field.

The field will be so deep that each 0.05 lost is another opportunity to fall off the pace.   When we combine the relatively static code, increased depth and some historically less than rigorous evaluation, the level playing field means the potential for upsets will be sky high at Regionals.  Throughout the Top 36 qualifications and into the Regional finals, upsets could abound.

And when the NCAA Championships roll around, the teams that aspire to the title can't afford to have too many unstuck dismounts or obvious minor errors.  The Code on UB/BB and FX is simply too easy for nearly all the athletes on the Top 50 teams to start from a 10.0.  A large number of teams will also be able to field high quality routines and break 197 points.  We'll also see more and more 10.0 Start Value vaults, as the very top teams with title aspirations can't afford to spot the leaders 0.2 tenths in total team start value.  Some teams may also take a different tact, aspiring to add unusual, creative and/or risky skills or choreography in an effort to stand out and grab those last few hundredths of a point.

Scoring records will fall across the NCAA.

As highlighted previously, the special extra year and scholarship granted to last year's seniors means that only 1 gymnast from the Top 25 all arounders in the regular season last year did NOT return (OU's Anastasia Webb).

Here are the top five returners by event (based on final RQS from 2021):

That's enough about the changes, let's check out what's happening with the teams!  Here's our Preseason Top 25 Season Previews: