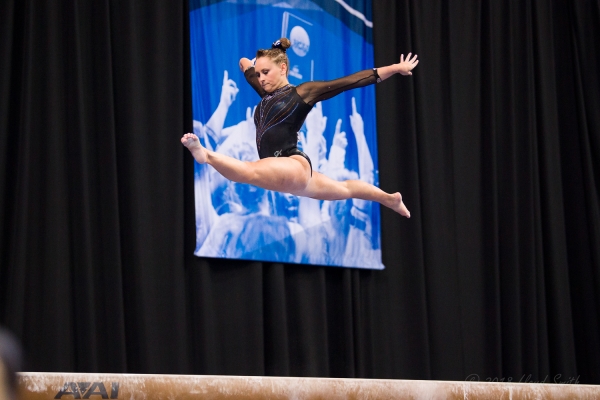 The first two weekends of the 2020 season have been completed, and now that we've seen the debut of the top squads, here are a few observations.

OU Ready for a Title Defense

Oklahoma made a strong impression the first two weekends, showcasing a highly conditioned, focused and polished squad ready to begin their title defense.  The Sooners showcased an seemingly healthier Maggie Nichols, who debuted a new back layout 1 1/2 twist stepout through to a double back mount on FX and hit a solid Yurchenko 1 1/2 VT.  Frosh Ragan Smith also made a solid debut, in particular on UB and BB, while on VT and FX her difficulty has been cut back, as you might expect given her history of injuries.  The Sooners showed some depth limitations on VT and UB in the first two meets.  They are also missing Olivia Trautman, who is out with an injury.  OU has a distinct advantage with five 10.0 start value (SV) vaults.  However, in constrast, their tumbling lacks some of the big FIG E+ power skills that the other teams showcase, relying on high value combinations and the USAG JO E-rated front double twist.

Denver also has impressed early on, with big scores, led by the first 10.0 of the season by sophomore Alexis Vasquez.  There were some concerns early on, with star Maddie Karr slowed by injury.  However, she barely missed a step and will be growing stronger as the season progresses.   DU has also seen a seamless transition from their frosh, in particular AK Subject and Amoree Lockhart.  Time and experience will only help with their depth.  Florida's debut this season was also strong, with Trinity Thomas quickly re-establishing herself as a national leader.  The rest of the squad has also stepped up, and a healthier Gator squad will look to build consistency under pressure during the season, to avoid a repeat of last year's finish.

It's still very early in the season.  UCLA star Kyla Ross is in top form and has already earned a 10 on UB. She's the clear leader of the squad, one that has been hampered by a number of early season injuries.  A lack of consistency on BB and a lack of depth on UB are apparent early on, and the loss of Coach Val Kondos-Field seems to be showing up most on the BB.  As injuries begin to heal and consistency builds, we'll hope to see them conquer the BB as well.  Similarly, LSU is facing some minor injuries to key gymnasts and the learning process that all freshman must progress through.

For teams like LSU and Utah, with large and important frosh classes, it sometimes takes time and competitive repetitions in order to translate what happens in practice onto the competition floor.  While some gymnasts transition more easily, such as Kiya Johnson at LSU, for others it is a larger struggle, especially if they are already dealing with a comeback from injury.  Teams that are reliant on newcomers, like ASU, are indeed facing some early season inconsistency and mistakes.  And when veteran stars are also working through injury, like LSU's Kennedi Edney, the problems compound.

Teams with large returning classes, minimal losses have a leg up on other squads, and are off to a fast start, especially when they add newcomers to the mix.  Among those squads with strong early starts include Minnesota, Alabama and Arizona.   Minnesota has added some key power gymnasts and have standout stars in top form, led by Lexy Ramler.  They pushed DU at home (and at altitude), which is no easy task for any program.  Bama appears stronger and ahead of last year's pace, with more athletes contributing at a higher level.  Their frosh have mostly entered the season in top form, especially Makarri Doggette and Luisa Blanco.  Although they made mistakes in their debut, the potential for a high scores and top to bottom depth is there.  Arizona has had an ambitious early schedule, but have shown solid performances early on.

Which squad featured some of the toughest mounts on FX of the first weekend?  LSU?  UCLA?  Denver?  Nope, it was Stanford.  The squad featured two double layouts, a full-in, a double Arabian, a back 1 1/2 twist through to a double tuck, and a back layout 2 1/2 twist to punch front.  And what's more, the squad may have additional upgrades on the sidelines.

Coping with the Code

With the new debut of the new code, we're seeing a number of judges conferences as the judging panels settle out scores that are not within established ranges.  This normally happens in every season, but it is especially troublesome when larger changes are made to the code.  Differences in deductions can have a larger impact.  With another tenth of bonus required on UB, BB and FX, the loss of credit for a skill or connection becomes more apparent.  Even on UB, where the changes are perhaps milder, we've seen a panel split between 9.5 and 9.95 on the same routine.  How is this possible?  One way is if one judge views a double layout dismount as not showing the required shape in both saltos, which downgrades the skill from an E to a C.  Not only does the gymnast lose 0.2 points in bonus, but she also gets an extra 0.1 in an "up to the level deduction".  And, if she did two giants into that dismount, she'll get another 0.1 deduction.  That's 0.4 in swing in score from one decision.

We are also seeing a wide range meet to meet and even event to event in how strictly the judges are evaluating the same routines.  Even just 0.1 per routine adds up to 2.0 points in team score.  That's the same span of point scores from #3 to #29 in the current rankings.  Thus it is hard to draw conclusions from any rankings at this point in the season, as at least one team saw nearly a 3.5 point swing in their team score week to week, in what was not even an especially tightly evaluated meet.

Not only did the NCAA issue new Code Modifications, but each season USA Gymnastics makes changes to the underlying rules governing execution and required technique.  These are also adopted by the NCAA, but get less attention from fans as they are often esoteric.  One large change made this is year is the way connections of all types are evaluated on the BB.  The JO Code now says a connection is broken when a loss of balance occurs.  They've deleted from the code, an exception that a stop must occur in order for the connection to be broken.  Thus a small wobble can break a connection, even if the gymnast keeps moving.  We saw an example this weekend that a tiny wobble on a front aerial broke the connection to the next front aerial.  Not only did the gymnast lose the 0.2 from not having the series, but she also lost 0.2 in bonus for the connection.  The JO Code also clarified rules around evaluating deductions for "tempo" for slow connections and arm movements between skills.  Gymnasts that stop movement of their torso, stop or alter their leg bend (plie) upon landing, and/or only circle their arms in a static position risk either a tempo deduction or even a broken connection (and loss of bonus).  In an environment where gymnasts are relying on connections to get an additional 0.1 in bonus, this is leading to some surprisingly low scores.

This is having impacts on scores, with the loss of bonus tenths and incremental deductions for lacking dance series.  But sadly, having watched meets from across the country at all levels, it's not being evenly enforced and will be a source of scoring variations until the panels and the gymnasts adapt.  Connections that include a two foot landing and take-off and front to back acrobatic series are especially vulnerable to these deductions.  Conversely, a so called "bounding" acro series such as a back handspring to back layout are generally immune.  This may also influence decisions in risk-reward in skill selection and lineup spots as the teams adapt to the changes.

We seem to be seeing many reports of injuries, especially to key athletes like Rachel Dickson of UGA and Courtney McGregor at Boise State, as well as potential standout frosh Hallie Thompson of UNC and Peyton Murphy of WMU.  Is it an epidemic?  It's hard to say, as this early part of the season always draws our attention to rosters and lineups, and information on injuries becomes more apparent.  There does seem to be an increase in injuries that do occur from late November through early January, as teams transition to training on hard surfaces.  This also follows a period of hard conditioning and training.  It is a phenomenon, however, that has apparead in each season.  Many studies have been done on injury prevention and causes, but the issues are very complex.  Are we seeing an increase?  It may require a formal study to exclude all variables, including observational bias  Anecdotally, we rarely see injuries reported over the summer, when the training intensity ramps down (or completely stops).

It Takes (Only) Two

One trend we are seeing is the increase in two pass routines on FX.  With the rule change on double backs and E skills, some teams are simply making the 2nd pass the final pass for these athletes.  It has many benefits, including the reduction of opportunities for deductions and potentially reduced wear and tear on the athlete.  One routine even features a Rudi opening pass and a back layout 1 1/2 twist to front full, along with two bonus dance combinations.  It's an unintended consequence of the rule changes on FX that award extra bonus for certain combinations.  The downside of this trend is that routines are being stripped down to two passes and a single dance combination (or in some cases, a single D with a small additional leap).  It's leaving large sections of routines with no skills of value (i.e. dance skills) and sometimes, less than inspired dance.